Expecting Twins? You Need to Read This

Twins! Double the car seats. Double the nappies. Double the babies. Double the love. 🤍🤍 For all our families out there expecting two [or more] little ones or who are searching for more info about multiples, this blog is for you. To kick-start the blog, let's look at some facts about twins.

- The more pregnancies a mama has already had, the higher her chances of conceiving twins

- Approx 25% of identical twins are mirror images of each other. This means the right side of one twin matches the left side of the other twin.

- Vaginal birth is possible if the leading twin is head down

- Twin pregnancies are considered 'high-risk' which means you'll be monitored more closely, may require extra ultrasounds, and if there are concerns such as growth problems, health concerns for mama such as pre-eclampsia or preterm labour, a mama may be recommended to stay in hospital for monitoring. For serious conditions, such as Twin-to-Twin Transfusion Syndrome [TTTS] where your little ones may require surgery in-utero, you may be transferred to a bigger hospital with more facilities or specialists. 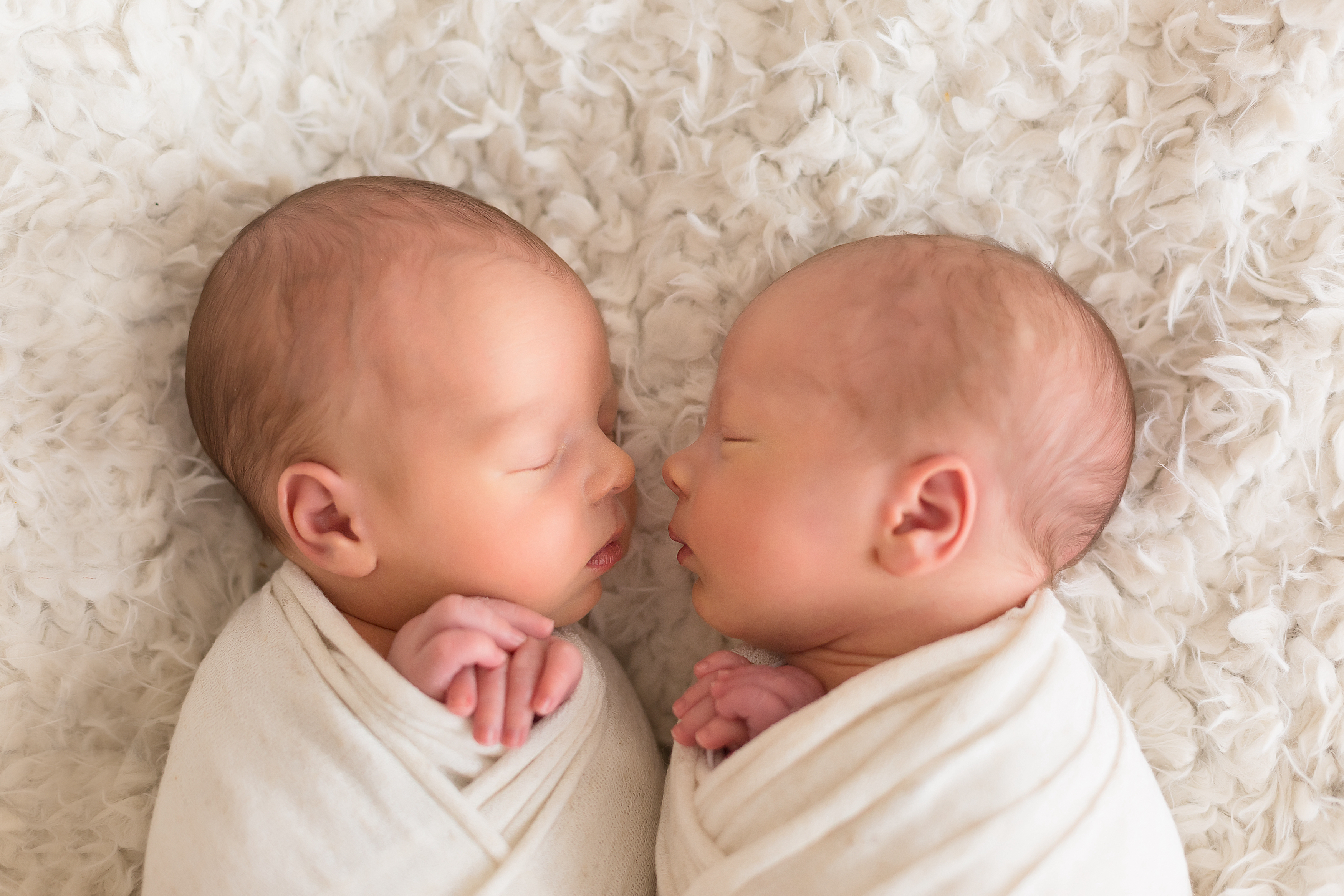 When a mama is pregnant with two bubs at the same time, it's known as 'twins'. Three babies = 'triplets'. Four babies = 'quadruplets'. And the list goes on. There are various different types of twin pregnancies that can occur:

Also known as dizygotic or fraternal twins, this occurs when two eggs are released, and both are fertilised by two different sperm. Each bub has its own placenta and sac, usually won't look the same and may also be of different genders.

Also known as monozygotic twins. This occurs when one egg is fertilised by one sperm. At some stage during early development, the egg splits in two, creating two babies. There are also different types of identical twins:

MCDA or monochorionic diamniotic twins occur when the twins share the same placenta and outer sac, but have their own inner sac. Almost two-thirds of identical twins are MCDA.

These identical twins share the same placenta, outer and inner sac. Approx 4% of twins are MCMA.

Irish twins is the term used when two siblings are born within 12 months of each other. They're not twins by medical definition, and this nickname has formed from society rather than the medical profession.

how common are twins?

what increases the chances of twins?

Having twins depends on various factors, like genetics, age, ethnicity, medications and a mama's past pregnancy history. The following increases the chance of twins:

- Genetics. If there are twins in your family, it doubles the chances but only on a mama's side. You've already had twins or multiples before. The chances of this occurring again is significantly increased.

- Mama's over 35. Some studies suggest that mamas aged 35+ produce and release more Follicle Stimulating Hormone [FSH] than mamas under 35. This might cause more than one egg to be released at ovulation.

- Your BMI is 30+ before falling pregnant. Mamas whose pre-pregnancy BMI is higher than 30 are more likely to have fraternal twins than mamas with a BMI under 30. 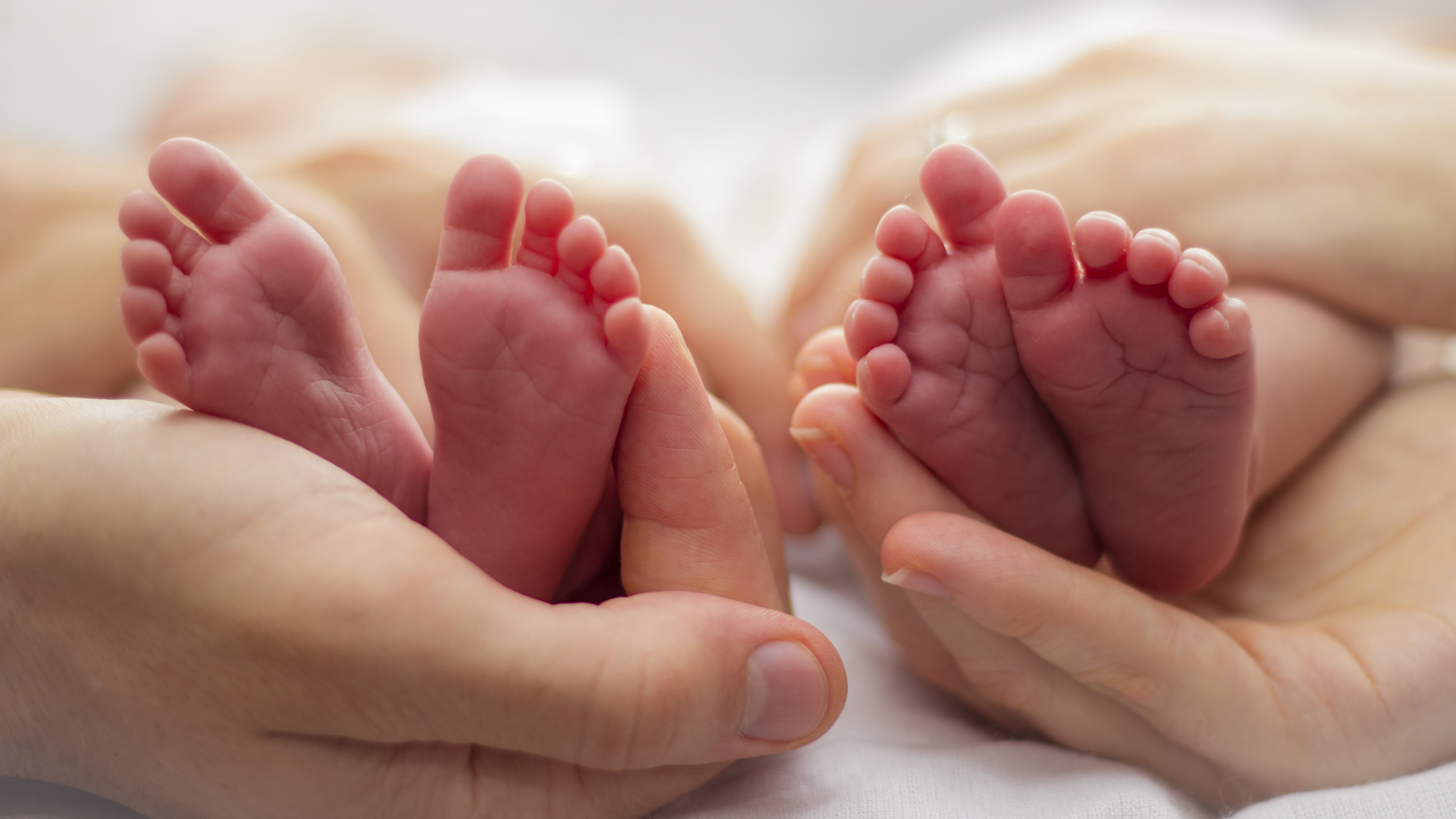 Being pregnant with more than one bub increases the chance of preterm birth. For more info on preterm birth, check out our blog on preterm labour. A c-section is the most common method of birth for mamas having twins, triplets or more babies, but vaginal birth is still a possibility if the bub who is presenting [coming first] is head down and both twins are coping with the labour. A mama who is pregnant with twins will be recommended to have a CTG and birth in the hospital. It's also recommended that you have an epidural because if there are complications, you already have good pain relief coverage, and the obstetric team can intervene more quickly [such as in the case a mama is recommended to have an emergency c-section].

After the first bub is born, a Midwife or Doctor may check the second twin's position by performing a vaginal assessment or bedside ultrasound. They will continue to monitor the second twin's heart rate to make sure they are still coping well. Sometimes twin 2 moves into a position that's not ideal for birth, such as sideways, with their shoulder coming first or breech, with their bottom coming first. In this case, the Obstetrician may recommend trying to turn bub, or offer a c-section. If your contractions slow down considerably after the first bub is born, the obstetric team may recommend starting the hormone drip to encourage contractions again. A c-section may also be recommended is bub's heart rate shows signs they are stressed or an emergency happens, such as the cord is coming first in front of their head [called a cord prolapse]. The second twin is usually born between 15-30 minutes after the first bub is born.

Yes, absolutely! Breastfeeding is definitely possible, even breastfeeding both twins at the same time using the football hold for both twins. Some mamas worry that their bodies won't make enough milk, and while this may be the case for a small number of mamas, it's not the case for all because supply = demand. If you want to breastfeed but are having trouble, reach out to a certified Lactation Consultant [IBCLC] for support. For some twins that are born preterm, their healthcare team may recommend breastmilk or donor milk in the early days. They also may not have their suck reflex developed yet, meaning they may require a nasogastric tube that goes down their nose into their belly to feed them milk until they are old enough and well enough to begin breastfeeding and start sucking. In the meantime, skin-to-skin and kangaroo care will promote bonding and the breastfeeding relationship. All of this info will be discussed with you if the time comes by your and bub's healthcare team.

Some mamas choose to exclusively breastfeed, express breastmilk, use donor milk, mix feed or exclusively formula feed. Regardless of how you choose to feed your little ones, make sure you are informed, supported and happy with your choice.

Vanishing twin syndrome is when a mama is pregnant with more than one bub, but something occurs, and one of the bubs pass away, causing them to disappear or get resorbed by the body partially or entirely. This is where the name 'vanishing twin' comes from.

According to a paper published in 2021, vanishing twin syndrome is seen in half of pregnancies with three or more gestational sacs, 36% of twin pregnancies, and 20-30% of pregnancies that used assisted reproductive technology. It usually happens in the first trimester but can occur at any stage of pregnancy. If it occurs in the second or third trimester, it should be referred to as the 'loss of a twin or multiple,' and a mama may require increased monitoring of her and bub during the rest of her pregnancy. Some mamas may have signs similar to a miscarriage. However, other mamas have no signs, and symptoms at all. In the majority of cases, the cause is unknown.

However, there are factors that appear to increase the risk:

- Placental abnormalities or size [being small]

- Assisted reproductive technology use, such as IVF

- Chromosomal abnormalities in the twin who passed away

This isn't like a traditional loss. The grieving process is really difficult. You are grieving one baby and grateful for the other. But a loss is a loss, you feel how you feel, and that's ok.

I hope that helps you understand more info about twins. If you've got any more Q's or are unsure, book into our Bump, Birth + Beyond course for all things pregnancy, labour and birth and postnatal related. On the original post, tag a loved one and let me know; did you or someone you know have twins? 🤍