In my first trimester, we moved from a capital city to a rural town that does not allow births in their small hospital. I had minimal antenatal care and booked into birth in another hospital, eight hours east, where my parents live. So they could help me with my toddler in the lead up while my husband was still back home working.

I was so anxious about birthing before my due date and having a newborn baby on Christmas Day with a house full of people for Christmas. My anxiety was bad in the lead up to Christmas Day and especially not having my husband with me in my last stage of pregnancy. As soon as Christmas Day started to wind down, I felt myself relax, and in a way, the weight was lifted off my shoulders, and I thought, “it’s ok, I can have the baby now Christmas is over”.

Low and behold, I woke up around midnight with contractions. They were consistent from the word go starting at around 8 minutes apart. I stayed in bed and ignored them the best I could, not waking my husband for two hours. By the time I woke him, they were 6 minutes apart, and he called the midwife as I was GBS positive and agreed to antibiotics. We wanted to know when they wanted me in. They said to have a shower and come on in to be checked but not to rush. I did just that. We let my mum know I was in labour and leaving so she could keep an ear out for our toddler, who was obviously asleep.

It was a 20-minute drive to the hospital. I kept my eyes shut and played my labour playlist to keep the oxytocin going. I had three contractions on the walk from the car to the ward but could feel them dropping in intensity. I was checked upon arrival and told I was 5cm, and they were happy to admit me. My husband had his instructions for turning on the music, dimming the lights, setting up my affirmation cards etc.

I told the midwife I was hoping for a drug-free birth and let her know the tools I wanted to use to manage the pain. I had a TENS machine with me that I loved with my first labour but wasn’t interested in it this time around. I spent the next couple of hours sitting on a yoga ball, head resting on the bed and breathing through the contractions. I wasn’t aware of anything going on around me at all. I completely retreated into myself.

After some time had passed, a Dr came in to see me and told me I wasn’t progressing as fast as they would like to see and wanted to break my waters. I declined as I knew from my previous birth any intervention could lead to another spiral of events. I blocked it out and knew that my birth was going to be fine, and I wasn’t going to allow the Dr to make me feel rushed. My midwife completely backed my decision and said as long as the baby was happy, she was happy for me to labour as long as I needed. Mind you, I had only been at the hospital for four or so hours.

Within the next hour, the pain was gradually increasing to a point I no longer felt I could cope. My Breathing techniques didn’t feel like they were working, and I felt like I was losing my focus and losing all control. I started to say I changed my mind and wanted the epidural. The midwife knew I was serious (I was a bit mean about my request) and organised the anaesthesiologist. When she came to see me, I think she could tell just by looking at me I was too far gone, and it wouldn’t be happening.

The midwife did an internal, and I could barely lie down. As I got up from the bed, she told me I was 8cm with a cervical lip and, considering I could not sit down or even stay still for one second, that we would be unable to do the epidural. I had a moment of sheer panic wash over me. The pain was surreal, and I didn’t know what to do with myself or how to compose myself.

I walked to the shower, turned the showerhead on to hot and held it again to my lower tummy. It was distracting me and helping me to regain some composure. Within a second, I screamed out “PRESSUREEE” and put my hands between my legs as though I needed to support myself.

The midwife ran over and said, “baby is coming” (don’t forget this is about 30 seconds after she told me I was 8cm). The midwife called out for help and said, “baby is coming. I’m not ready yet” another midwife ran into the room and threw the pillow from the bed onto the shower floor. I felt my waters pop and heard my husband laugh. I think I splashed him. He was holding the showerhead on me still. After he initially turned it off and I screamed at him to turn it back on. The midwife told me to open my legs wider to allow the baby to come out. I don’t remember ever actually forcefully pushing, but I could feel him come out with each contraction. From the moment I felt pressure, I had three contractions, and he was in my arms. It was screaming “I can’t do this” the entire time as I was doing it, which seems so silly to me now. I was standing in the shower holding my baby while the midwife did whatever she was doing. 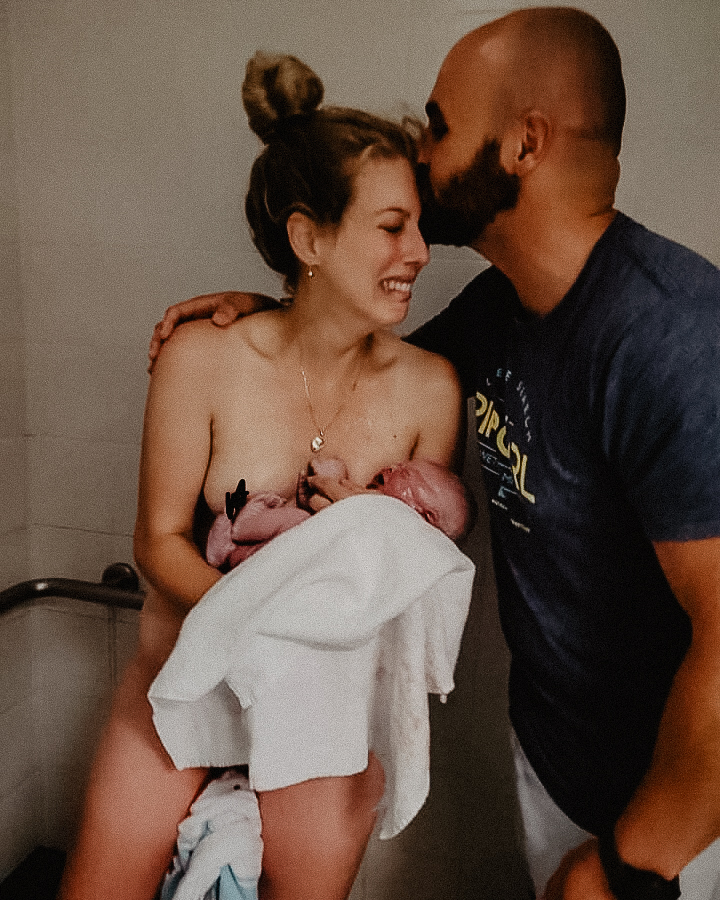 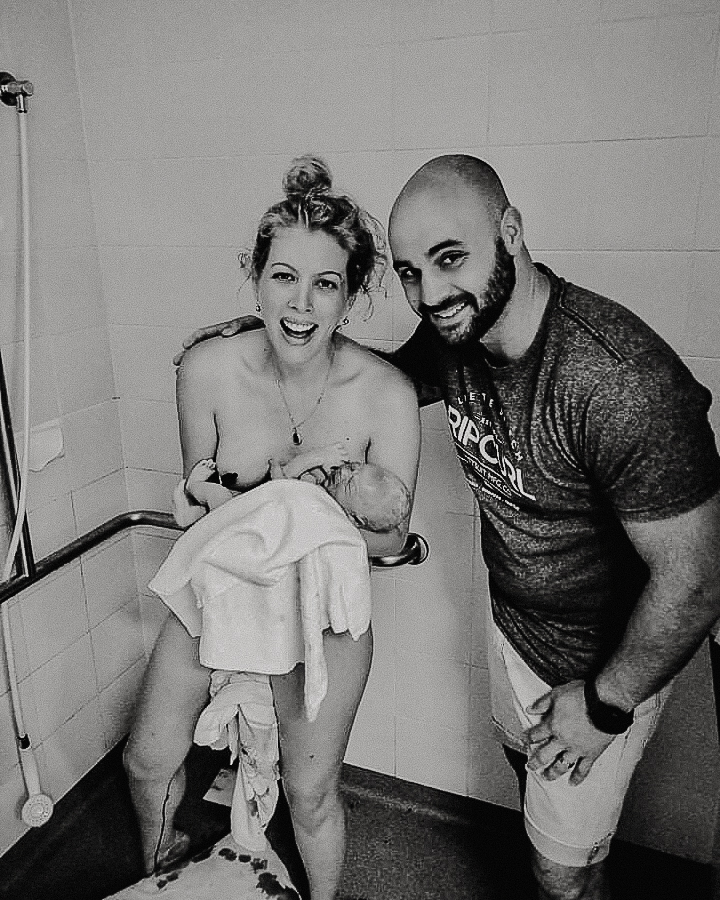 I was oblivious and was in absolute shock from what happened and how quickly it happened. I walked over to the bed holding my new baby boy, just amazed. I had a physiological third stage and birthed my placenta, and had delayed cord-cutting. I ended up with a 2nd-degree tear which was stitched up quickly. Baby was left on my chest for the longest time and not taken to be weighed and checked until I was ready. It was amazing.

My midwife was absolutely amazing and the biggest support. It wasn’t until after birth that I really thought about everything that happened and realised whilst I was in my zone, she was reading my affirmation cards to me and being my cheerleader the entire time. I felt so proud of myself that I got the birth I intended, especially after my first birth full of interventions and the PPH. I stayed one night in the hospital, and it was bliss. The midwives put me in my own room and, knowing I was a second-time mum, were happy to shut the door and see me in the morning. I had a beautiful bonding night with my second boy that I will treasure. 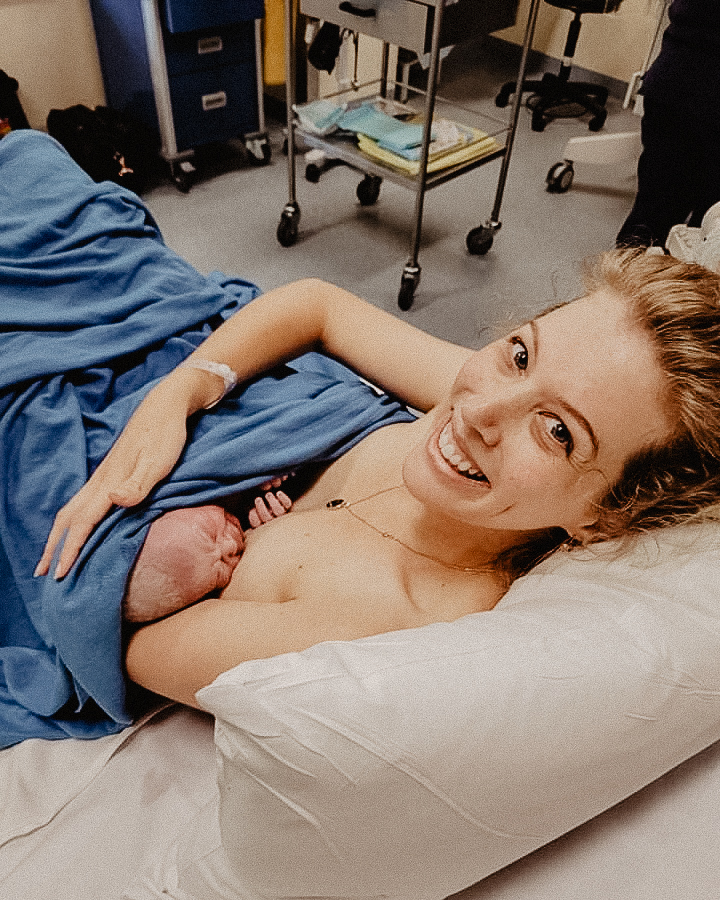 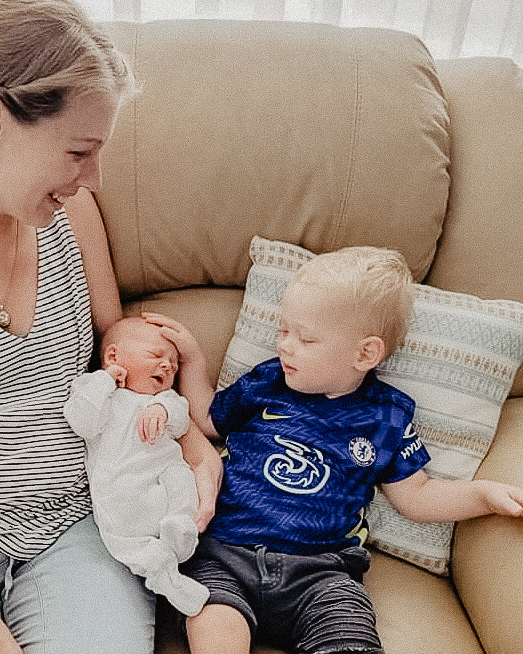