After experiencing three natural births, I thought that the fourth time around would come easy and that I knew what we were in for. Little did we know that our boy George was about to make his entrance into this world in the most dramatic fashion and give us the fright of our life.

It was the 4th of June, and I was a day shy of 38 weeks. We had a super busy day ahead of us, but busy days were totally normal. Running around after three kids while also running a small business meant I rarely had downtime or quiet days. It wasn't unusual for me to spend a whole day on my feet. On this particular Saturday, we had a trip to the farmer's markets in the morning, a soccer game for our eldest boy Dusty and later in the day, I headed out to an early dinner and a show in the city with my Mum and sisters.

Being busy the entire day meant I hadn't had a chance to stop and notice baby's movements. It wasn't that I noticed that movements had slowed, but I hadn't stopped long enough to properly check in with him. It wasn't until about 5.30pm before dinner when my sister put her hand on my belly and asked if the baby was kicking. I told her that he hadn't kicked in a while, but I would let her know when he did so she could feel him. A couple of hours later, she did the same thing, and I told her I thought I had felt one a little earlier, but he wasn't at that moment. It was then that feeling him move went into the back of my mind, but I wasn't worried at this point. It had been a busy day, and I knew when I stopped and lay down that night, I would feel his kicks like I did every night. Each night after the chaos of the bedtime routine with the kids, I would lie down, and that's when he would be the most active. I loved being able to enjoy time with just me and him.

The city is about an hour's drive from our home, so it wasn't until about midnight that we eventually got back. I hopped into bed, and that's when alarm bells started going off. I didn't feel anything like I usually would. I poked and prodded, trying not to get myself worried, telling myself it had been a big day and he was probably just asleep. I then started running through the checklist of getting your baby to move. I got up and had a snack. I shone a torch on my belly, played music to it, and was up doing jumping jacks and quickly laying back down. I tried everything. But still nothing. By this stage, it had been an hour, and I was starting to really worry. My best friend had a stillborn baby boy a few years ago, and he saved George's life. There was no way I would have been so proactive if I didn't know Sol's story. So many people believe that movements slow down toward the end of pregnancy and that babies run out of room in the uterus, but I just knew that wasn't the case. It is one of those myths out there that everyone should know isn't true. 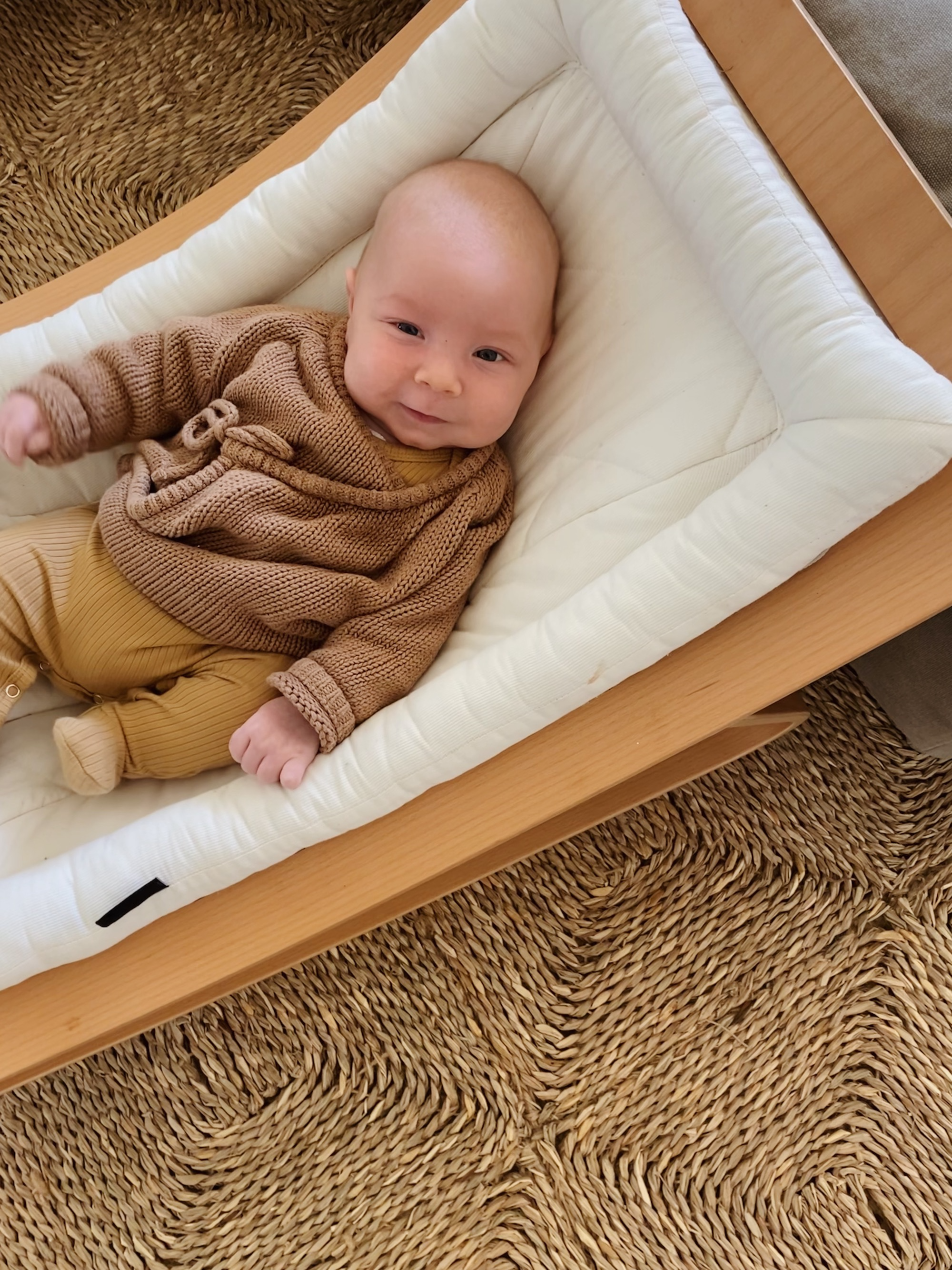 It would have been so much easier and more convenient to wait until morning to get checked out. I was tired, and it meant I had to wake my husband and Mum for something that could have just been nothing, but I'm so glad that we did what we did next. It was 1.30am by this stage, and I called the midwife, who told me to come in and they would put the monitor on. I woke Blair and then called my Mum, who was up and over in 5 minutes.

We got into the assessment room, and the midwife put the monitor on my belly. She announced she had a heartbeat immediately. I let out the breath I didn't know I was holding and burst into tears. I was so relieved. But that feeling didn't last long. Not long after the monitor was on, the midwife called in the obstetrician. They told us the heartbeat was a little irregular and that because I was officially 38 weeks, they recommended I be induced. We were going to meet our boy really soon. We were not expecting it as we had walked in with only our car keys and phone, but we were obviously keen to get our baby out safely. Not long later, the doctor came back in and told us that the plan had changed. They said that our baby was struggling a bit more than they initially thought and that labour might be too much for him to handle, and they recommended a caesarean. It was a lot to process in such a short amount of time, but of course, we said okay. 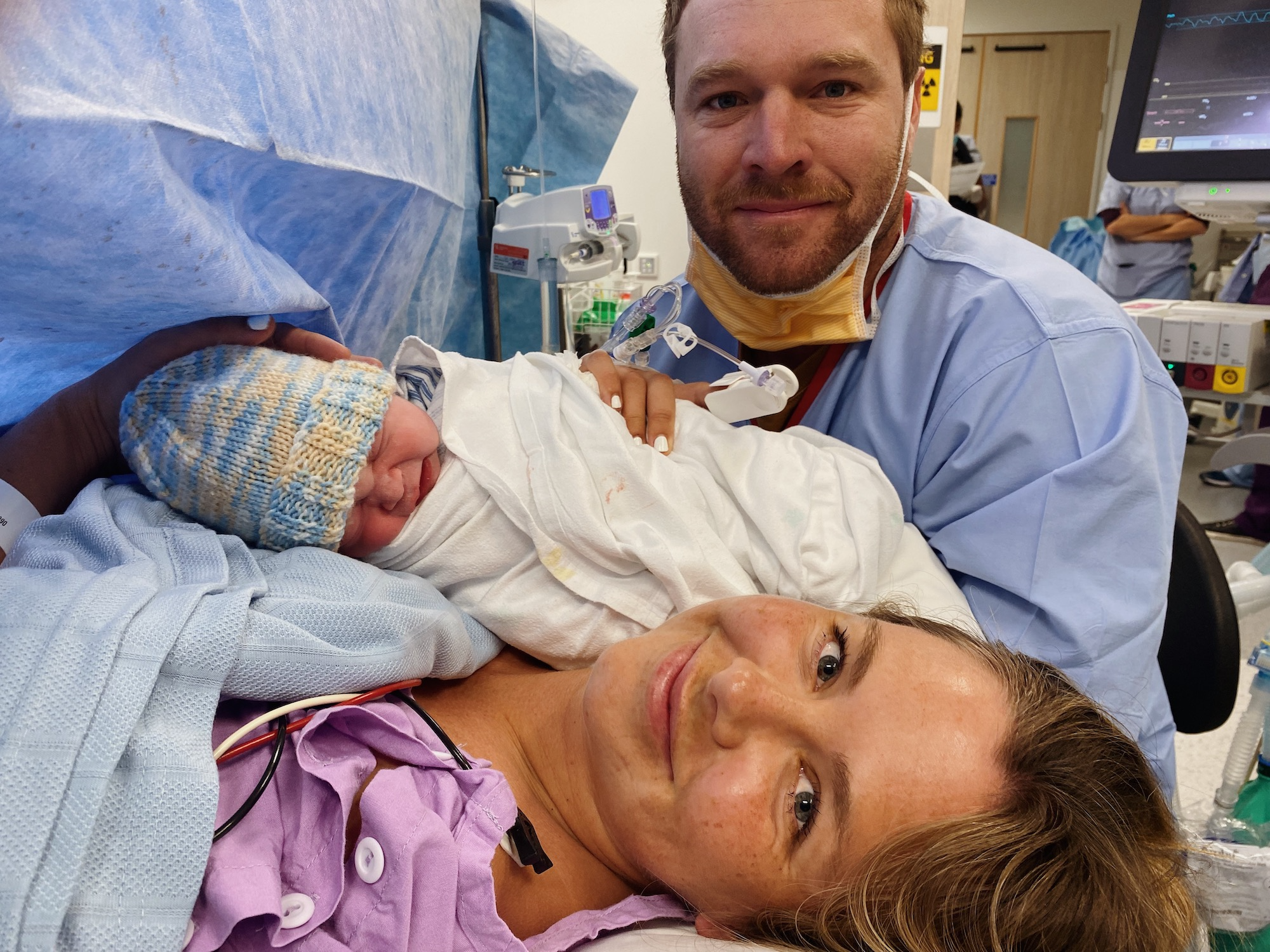 We were getting ready to go into theatre when things really escalated. It was all very surreal. The room filled with people, and we were told we would hear a loud siren. They needed to act fast, and this would now be an emergency caesarean as they were getting more and more worried about our baby's condition. I was wheeled into the theatre and went into complete shock. I couldn't stop shaking. A nurse had to take her hair out to do mine up as I didn't even have a hair tie. Our baby boy was out within one minute of them making the incision. I had never had a caesarean before, so I had no idea what to expect, but I knew that the silence wasn't okay. My heart sunk, and I just remember thinking, 'what is happening right now?' It was all so much to process. My husband went into the room next to me with our baby, and I was stuck flat on my back while they stitched me back up. I turned to the nurse whose hand I didn't even realise I was holding and asked if everything was okay. She said it was too early to say. It felt like forever, but only a few seconds later, she told me she could hear the cry, and they announced that we had a little boy. They brought him over to me and said I could say hello quickly, and then they would need to take him to be checked out. Again, I had never had a caesarean, so I didn't know this wasn't a standard procedure. I thought he was okay, and they were just being diligent in giving him some extra checks. I went through to the post-theatre ward and then through to the maternity ward, and that's when it hit me that things weren't quite right. The doctor came in and explained that he was born, not breathing, and had needed resuscitation. Although they were successful in reviving him, his vitals had crashed again, and he needed some more help breathing. They wheeled me in to see him, and there were just so many tubes and wires attached to our tiny baby. They explained that they were worried that he had suffered a certain extent of brain damage during the traumatic delivery as there was a point in time when his brain had received no oxygen. There was a team on the way from the Royal Brisbane Hospital that were bringing some equipment that was needed to place George on cold therapy. Basically, it is a treatment designed to slow the effects of brain damage and, in turn, possibly reverse any that has already been done. Cold Therapy is a fairly new treatment and wasn't offered at the hospital we were at, so they would be taking George to Brisbane (a one-hour drive in an ambulance) to complete the course of treatment. We were so incredibly lucky that the RWBH was so close, and the amazing medical team worked so fast as this treatment needs to start within 5 hours of the incident to work the most effectively. 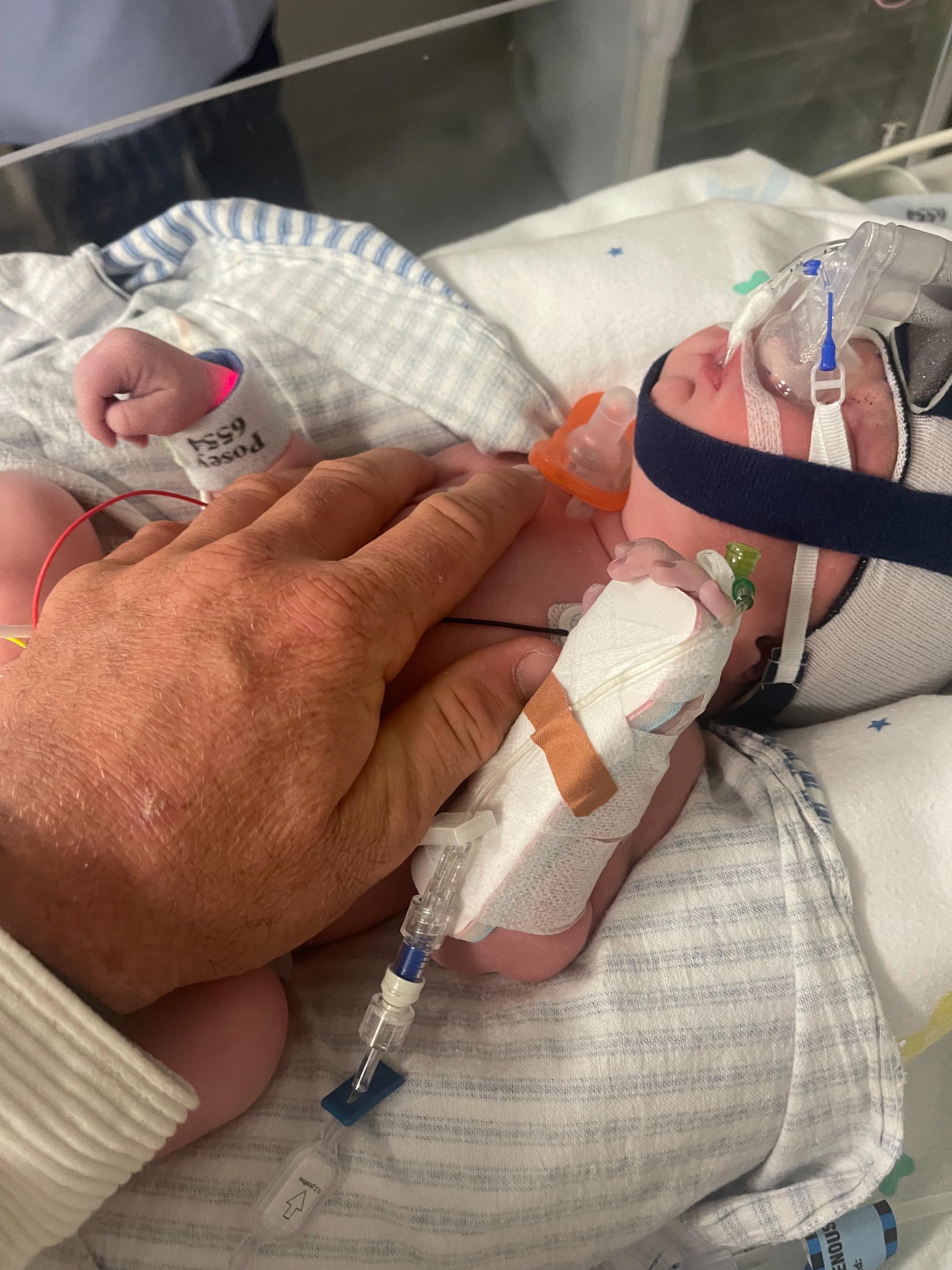 As I had just had a caesarean, I was still an inpatient myself. Even though the hospital put through a request for me to be transferred, there were no beds available that same day, and I spent the longest 24 hours away from our newborn baby. My husband Blair was able to rush to Brisbane and didn't leave George's side, and he sent countless photo updates that I still find hard to go back and look at. I felt so helpless but so grateful for the support system we had. We had three big kids being looked after by our amazing family, so we could focus on getting our baby home.

The next day I was able to get a transfer and be with George and Blair. However, it would still be another 48 hours before he could be taken off cold therapy, so we were still unable to hold or feed him. During cold therapy, he was dressed in nothing but a nappy and placed on a cooling mat where his body temperature is lowered to 33 degrees. It is beyond every maternal instinct (which is usually to rug your little one up, keep them close and constantly feed them) to watch your baby go through that. It wouldn't be until after he was warmed that we would know the extent of the brain damage. We were told it was expected to be on the scale of mild to moderate. The unknown was terrifying. 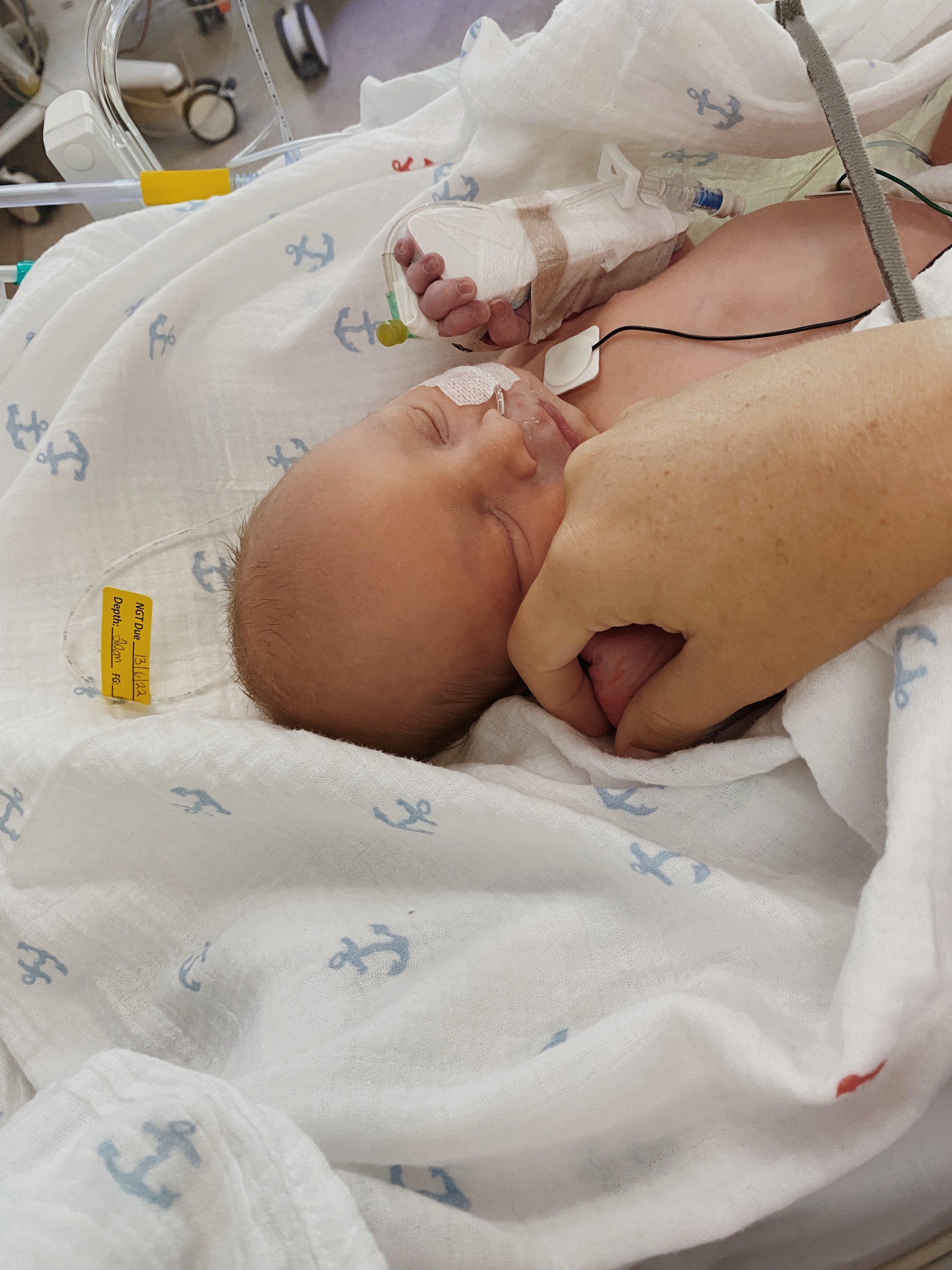 After George was warmed, he underwent so many tests. Our little girl counted 21 pricks in his heels. We received the results of his MRI on day 5, and it came back with the best news we could possibly ask for. There were no signs of any damage to the brain, and developmentally they were really happy with how he was progressing. On day 6, we were discharged, and we finally got to take our boy home to meet his big sister and brothers. George will still receive regular checkups on his development all the way up until he turns 6, but so far, he is absolutely thriving.

George is now 3 months old and the happiest baby ever. After being unable to hold him for the first 4 days of his life, it is safe to say he is the most snuggled boy out there. Every medical professional we have spoken to has told us how lucky we are that George is here with us today. That if we had waited any longer his story would not have his happy ending. I will forever feel like the luckiest Mum in the world that we have our boy here safe. 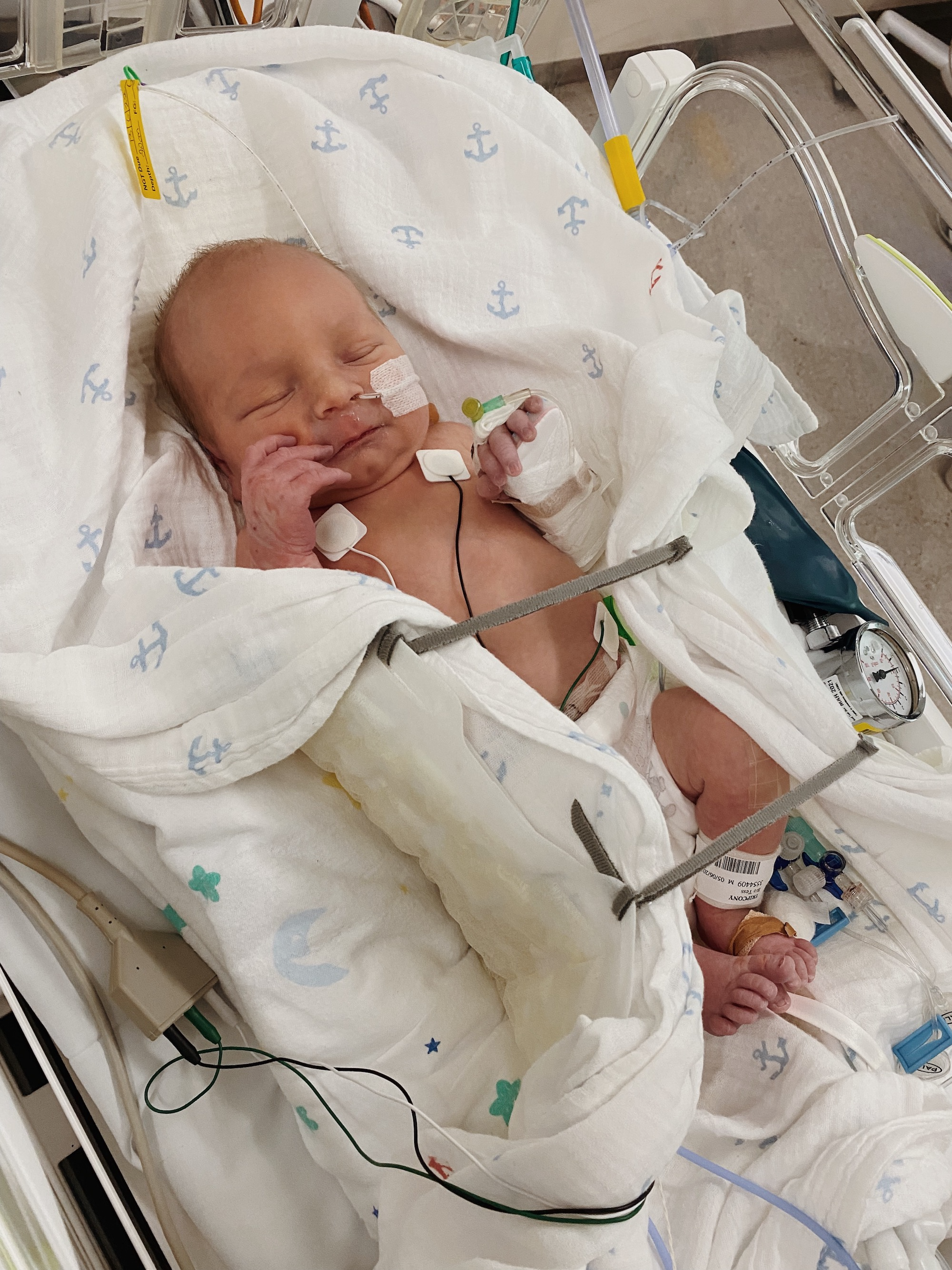